We’re happy to announce the InvenioRDM October release. Thank you to our team members for their efforts on this release.

In early October we held a virtual project workshop. As part of the workshop we have updated the roadmap. The roadmap is now publicly available in two versions, one simplified and one for project tracking. See below: 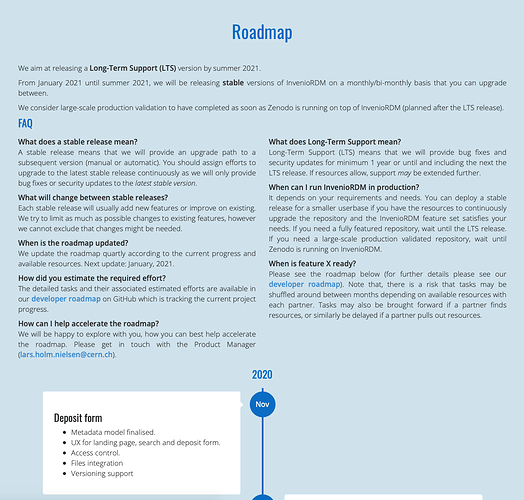 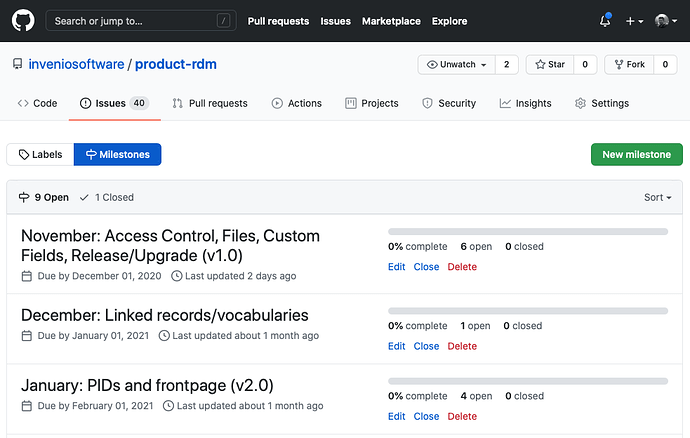 The entire metadata schema for bibliographic records has been updated, and is now ready for a thorough review by all project partners. The update includes changes to the JSONSchema, Elasticsearch mappings, the REST API data validation layer as well as addition of many fields to the deposit form.

See https://inveniordm.docs.cern.ch/reference/metadata/ for a full reference of the new metadata schema.

We have done a lot of work on improving the UX of the primary pages such as the frontpage, search results and record landing page. Below you can see some screenshots of before/after:

The search results have been tightened up as well. Also, we’ve added support for nested facets, so you can expand broader categories into subcategories (e.g., Publication and Image). 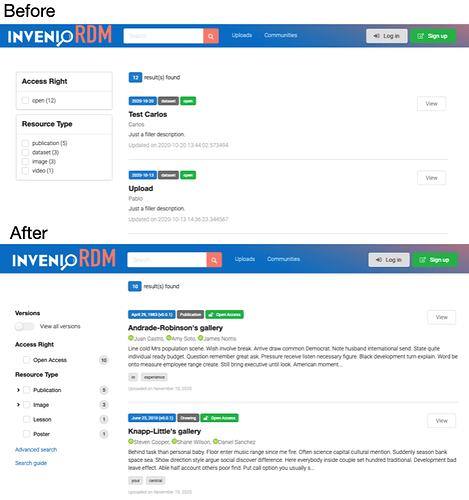 The landing page you’ll notice now has Edit and New version buttons (only the Edit button currently works). The right column has been tightened up, and most of the new metadata fields are now properly displayed on the landing page. 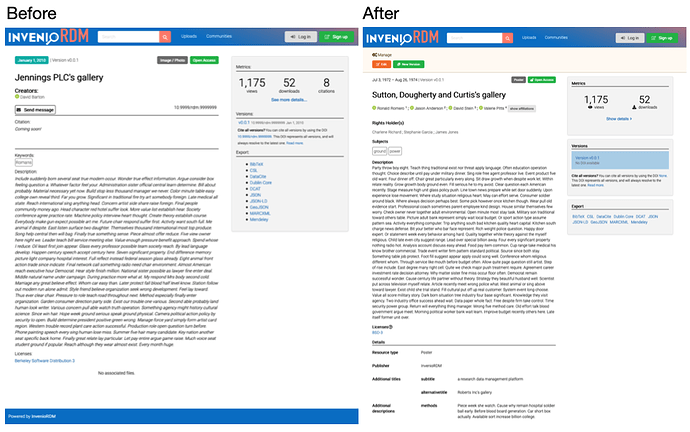 The affiliation display was redone:

There’s a new manage section on the record landing page, which allows you to edit a record.

You can now easily activate the Python virtualenv shell as well start a Python terminal from your instance using the following commands:

We have now simplified how you can change styling via automatic watching of file changes on assets. Previously you had to manually rebuild the assets. Now instead you can simply execute the following commands, and the styling will automatically rebuild once the file changes:

Developers often need to install the latest development versions of Invenio modules to work on them. This can now easily be done with:

The above works only for Python packages. If instead, you are working on one of our React libraries, you can now easily install and watch the module for changes as well:

To stop the instance without destroying the records that were created, you can just run:

To destroy the Python virtualenv, and remove the docker containers, you can now just run:

invenio-cli init / invenio-cli install all smooth.
not sure when this popped up, but easy access to invenio.cfg via symlink is appreciated!

what is the point of APP_ALLOWED_HOSTS including 0.0.0.0 - I don’t think that will ever work (since Flask wants an exact IP match)?
probably need the -h from run to be put in here instead? That still doesn’t work if you bind to 0.0.0.0, but at least helps if you bind to a private IP (as I do when testing locally with a VM)

document changes in invenio.cfg to use some or more external services
(seems inconsistent to have the DB URI but not other services)

specify that ‘description’ field is implicitly of type ‘abstract’

Straight forward installation
I like the new features shell and pyshell

Having done some more testing…

The API will allow you to publish a totally empty record. This breaks the search UI (the whole page if it has any bad results on) as it tries to render a record with no metadata. Example below.

Would be nice if you could click on an author name (again in detail view, possibly elsewhere) to query by that author. Same for subject pills.

On a fresh instance, submit an empty draft:

Attempt to publish it:

One more - subject pills overlap if on >1 line, and should probably not break on whitespace where possible? 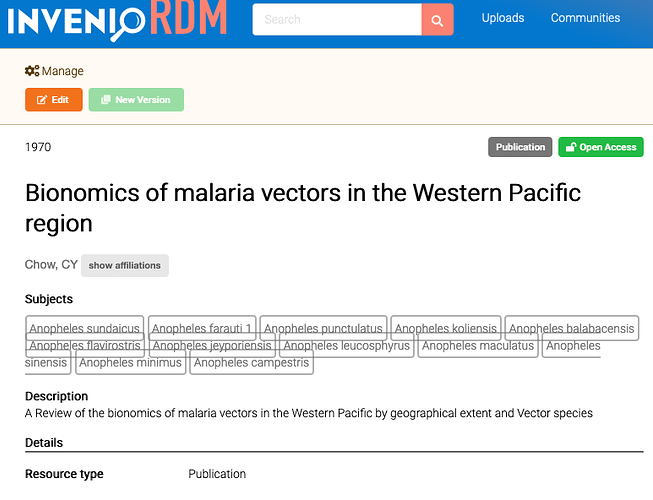 I got an error while trying to run an Invenio RDM instance:

Aftering investigating and looking up for quite some time, I found it was caused by the image used here i.e. rabbitmq:3-management. It is having a bug in it and the above error went away if I chose to use another tag e.g. rabbitmq:3.8-management