. We’re excited to announce the InvenioRDM Alpha 15 (January release)! Thank you to our team members for their efforts on this release.

This month was primarily dedicated to improving the user experience of the deposit form.

We have made significant improvements to the overall user experience of the deposit form. That said, we still have many smaller UX improvements to make. This work will continue throughout February. 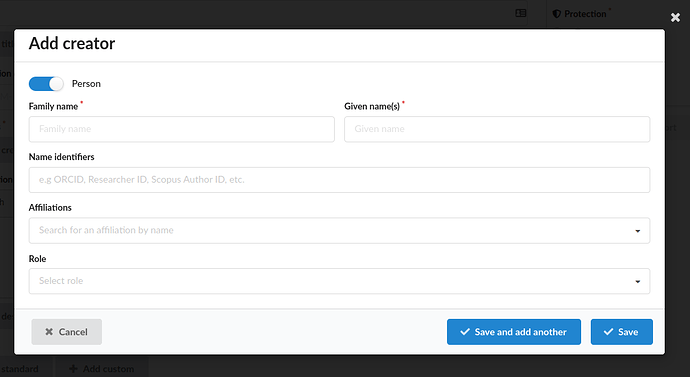 The creators/contributors fields have gotten a complete makeover that significantly reduces the clutter. We have optimized the new creators field for adding basic information (name/affiliation) as well as linking the affiliation field to vocabulary records (e.g. ROR). We postponed the more advanced use case of allowing to edit all fields such as identifier scheme and identifiers for affiliations, as this created an overly complex form for the majority of use cases.

The creator field we imagine can be extended in the future with support for importing authors via predefined files (e.g. BibTex, etc.)

One particular feature to highlight, is that the name identifiers field now does automatic detection of the identifier scheme. You can now paste an ORCID (e.g. an ORCID URL), and the backend will automatically detect it as an ORCID and normalise the stored value.

We have decided to hide certain fields that we know need further work. You’ll see these as “Coming soon”. Also, we have temporarily removed the language field from titles and descriptions as we had last minute issues with these fields.

To stop the instance without destroying the records that were created, you can just run:

To destroy the Python virtualenv, and remove the docker containers, you can now just run:

I was able to save a draft and publish a record with a field marked as required and not filled. The Dates:date field was not filled but I still could upload the document.

Librarians on our side too experienced that confusion with respect to Dates.Date having an asterisk. It is working as expected though. The top-level Dates field is optional, If filled out, then the Dates.date subfield is the one required i.e. leaving the other ones unfilled is fine (conversely, if you fill the other Dates subfields, you need to fill the Dates.date field one).

Maybe it’s one of those things depositors will get used to. Being consistent in marking other required subfields might also make this seem less aberrant.

Probably the dilemma is to use a symbol with two implicit meanings?